Leslieville & Riverdale Real Estate: How did Gerrard Street get its name?

Gerrard Street — Named for the Gerrard family, especially the Irish businessman Samuel Gerrard who was a friend of the receiver general, Captain John McGill. One of the famous residents on Gerrard Street, although for a very short time, was Grand Duchess Olga Alexandrovna. Sister of Tsar Nicholas II, Olga lived her last days in Riverdale, sharing aa small apartment at 716 Gerrard Street East with friends, a Russian couple named Colonel Konstantin and Sinaida Martemianoff. Not long before, Olga had been a guest on board the Royal Yacht Britannia when Queen Elizabeth visited Canada in 1959. Olga had married twice; her second husband, Colonel Nikolai Kulikovsky, was a cavalry officer. They and their two sons, Guri and Tikhon, fled from St. Petersburg to the Crimea in 1917, after Olga’s brother and his family were assassinated during the Russian Revolution. They continued on to Denmark in 1920. In 1948 they immigrated to a farm in Ontario. Nikolai died in 1958. An accomplished artist, Olga’s paintings are in collections and museums around the world. She is quoted as saying, “If I ever start crying, I will never stop.” Gerrard Street East from the Don River to Broadview was formerly called Josephine Street; from Broadview to Blong Street it was called Rambler’s Road.

Here are some great historical photos of Gerrard Street East. 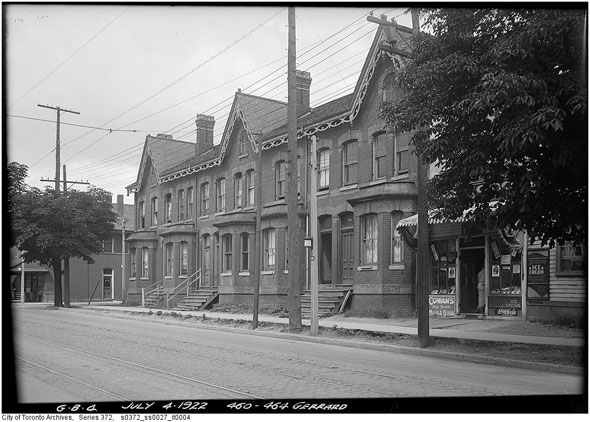 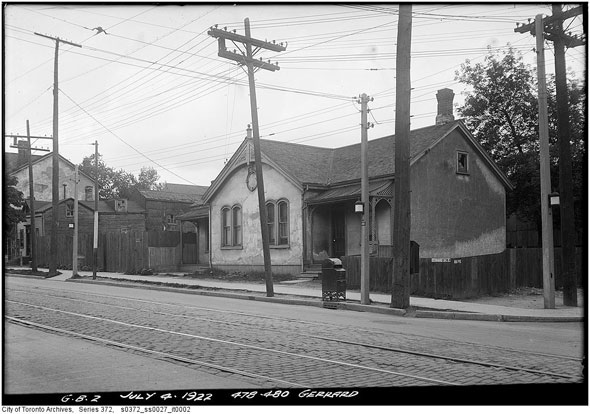 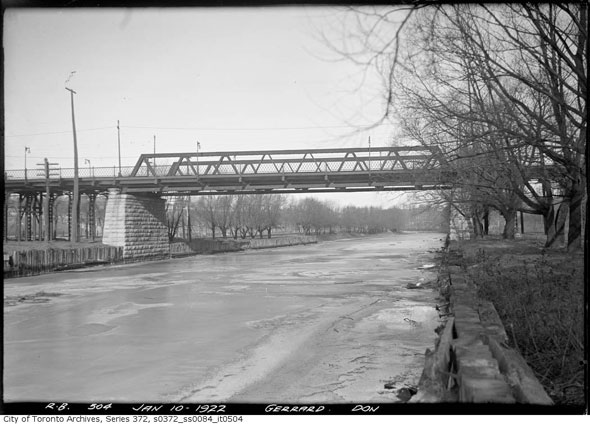 The old Gerrard Street East bridge over the Don River.

The isolation hospital at Gerrard and Broadview, which has now evolved into Bridgepoint Health. 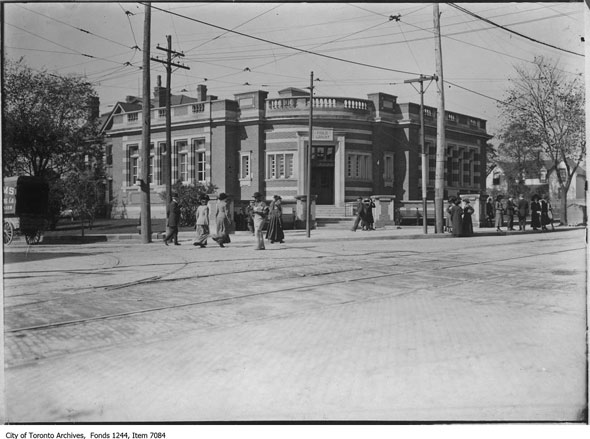 The Riverdale branch of the Toronto Public Library at Broadview. 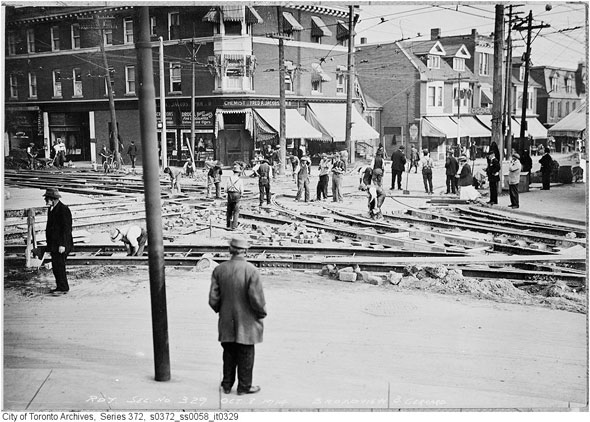 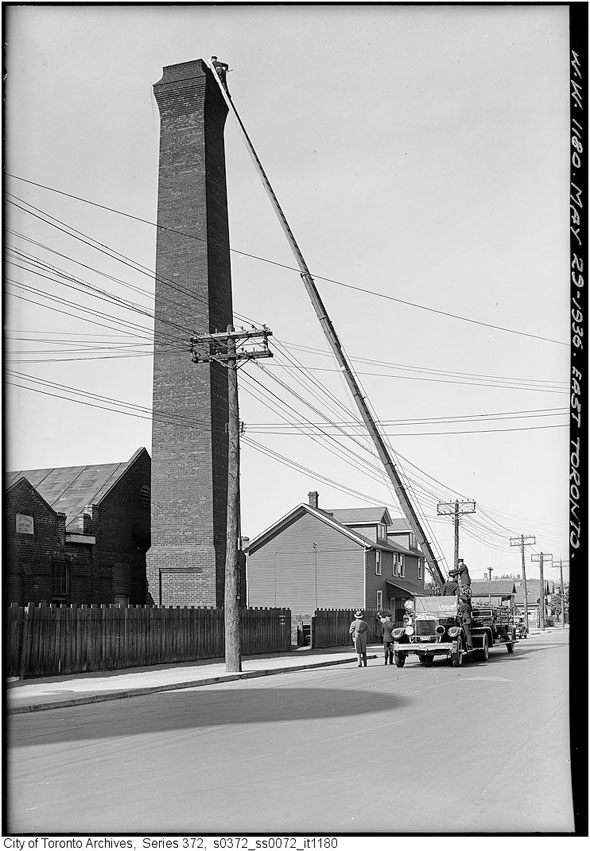 Chimney cleaning required a long ladder and nerves of steel in 1936. 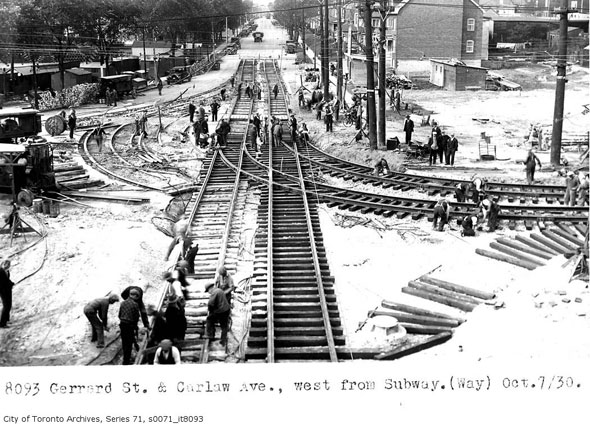 Gerrard and Carlaw. The streetcar tracks curving north were part of the lost Harbord line, which once snaked its way down Pape from the Danforth, west on Riverdale Ave., south on Carlaw, west on Gerrard to Broadview and through downtown to Davenport and Lansdowne via Dundas, Spadina, Harbord, and Ossington. The route was abandoned when the Bloor-Danforth line opened in 1966. 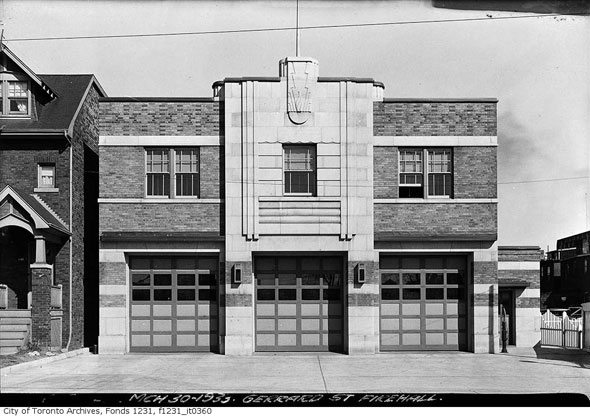 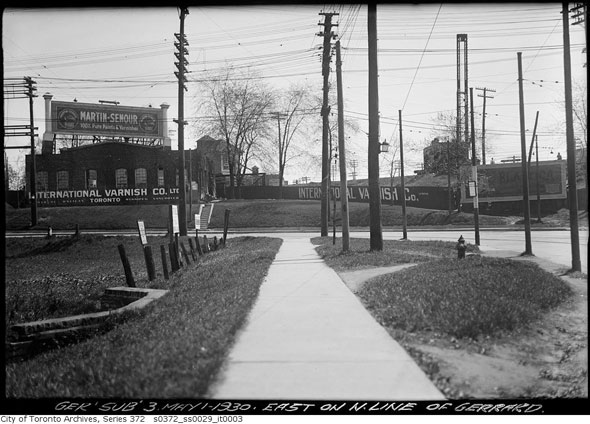 The International Varnish Co. complex which used to at the northeast corner of Carlaw and Gerrard. Today, it’s a No Frills supermarket. 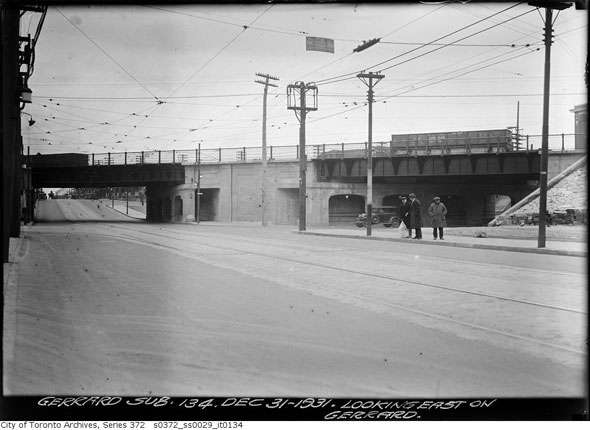 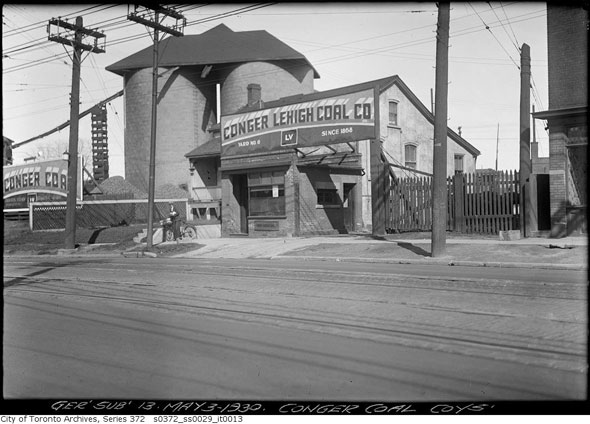 The Conger Lehigh Coal Co. building on the north side of Gerrard, just west of Pape. 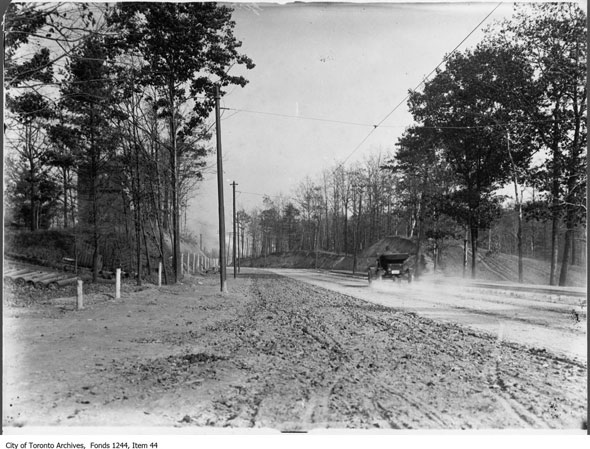 An unidentified section of Gerrard St. when it was still a dirt track through the trees. 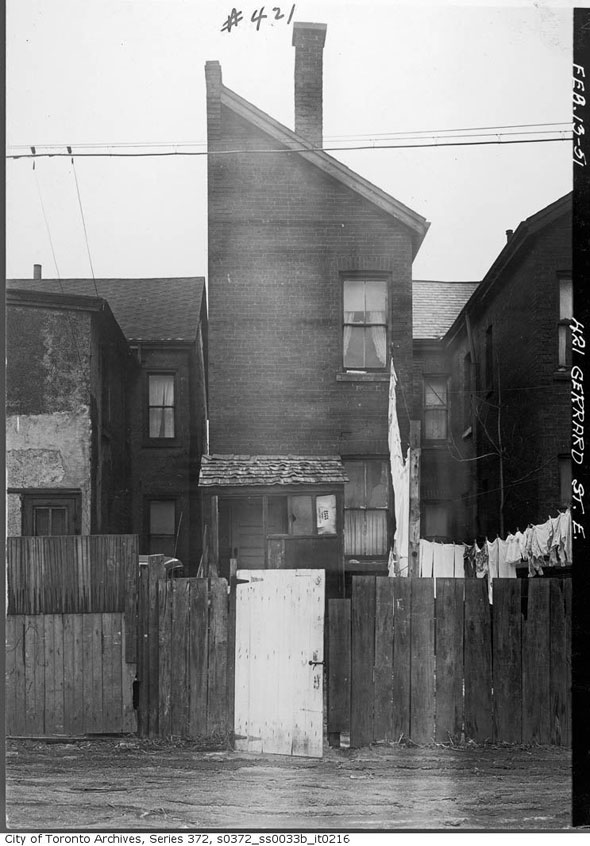 A half house on Gerrard. 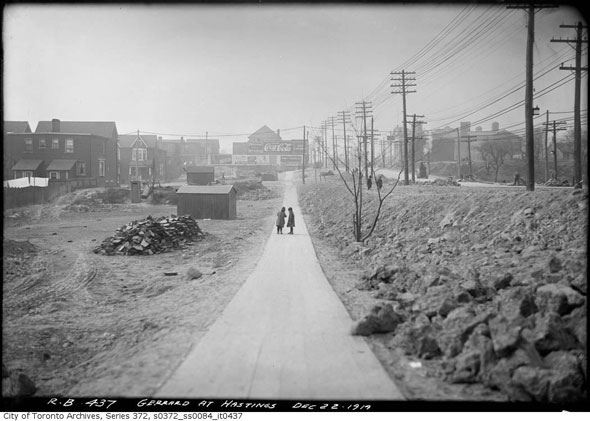 The south side of Gerrard near Hastings Ave. 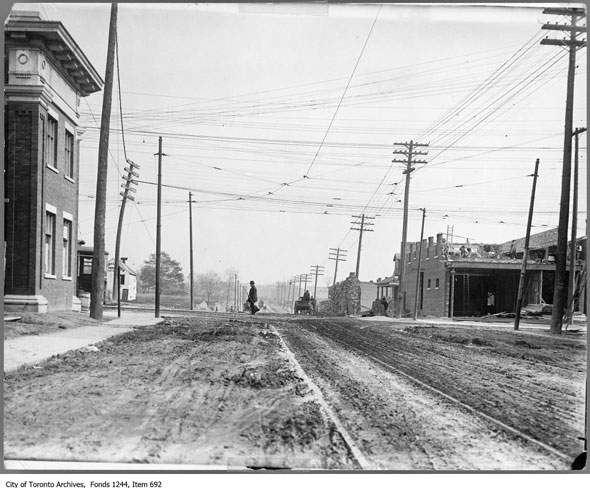 Looking west along Gerrard over Greenwood. The dip in the land is a (now) lost creek on the old Ashbridge family farm. 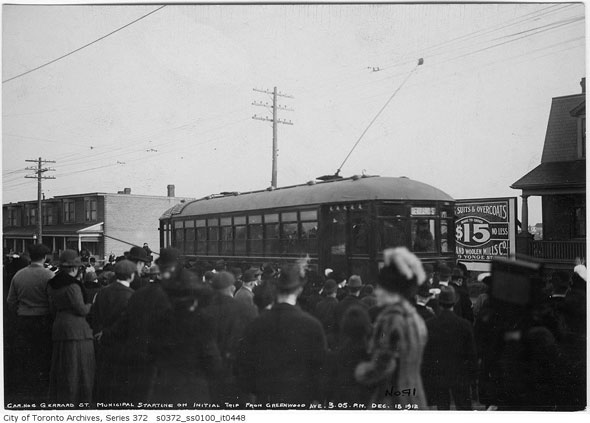 Crowds at Greenwood Ave. wait to board the first streetcar on Gerrard. 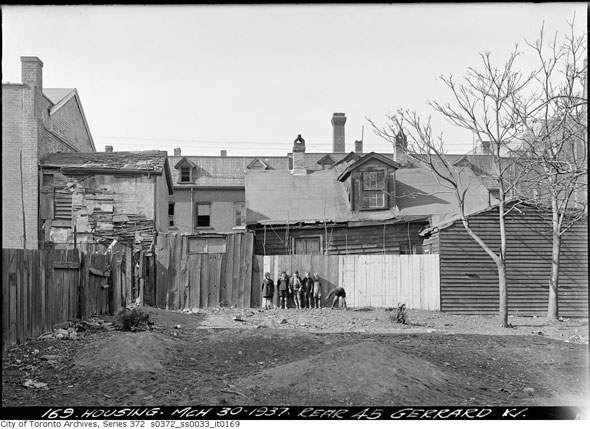 Kids line up for a photo on Gerrard St. 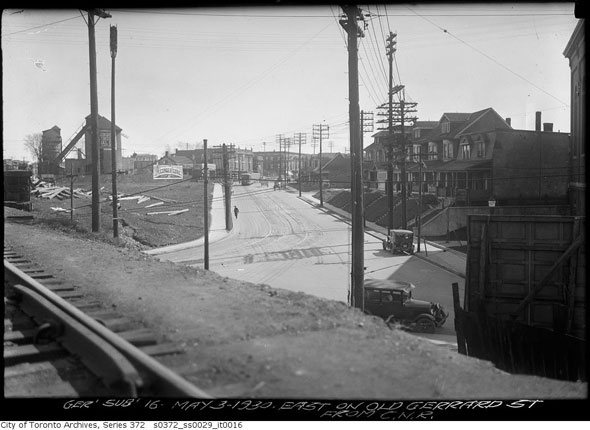 The section of Gerrard that was severed when the new rail underpass was created. Confusingly, it’s still called Gerrard. 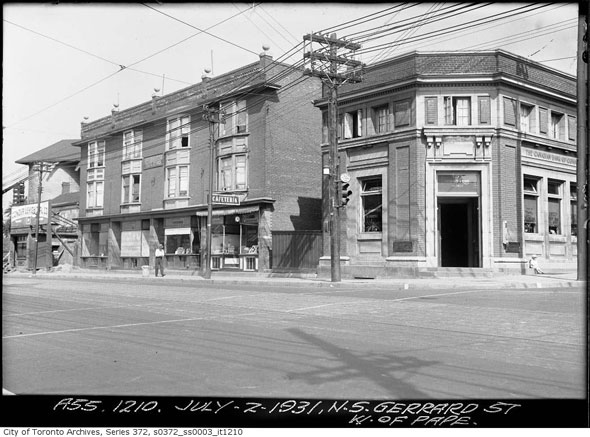 North side of Gerrard, just west of Pape near present day Gerrard Square. It still looks pretty much the same. 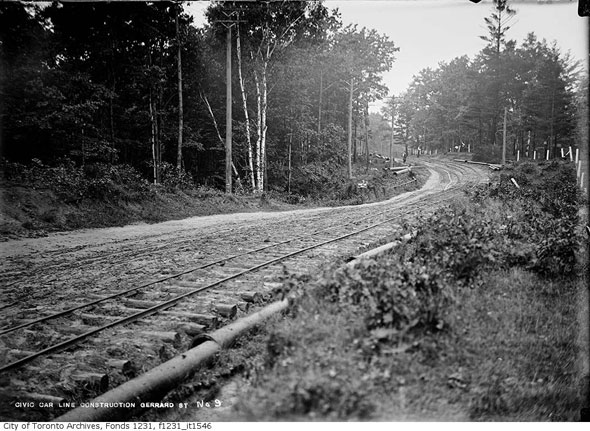 Another bucolic scene on an unidentified stretch of Gerrard. 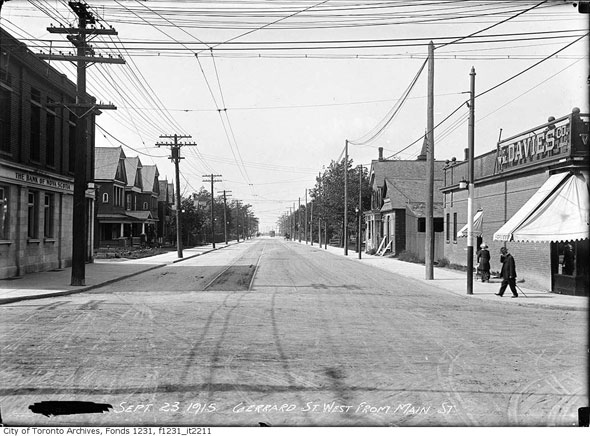 Thanks to BlogTO for putting together these great photos!

Leslieville & Riverdale Real Estate: How did Gerrard Street get its name?