I’m a bit of history buff. I enjoy reading about the history of our beautiful neighbourhood.

This, however,  has not been a life long love.

When my father passed in 2010 I become interested in our family history and the search to determine how I came to be here began. I was obsessed with finding cousins, many of which have become good friends today. When all of the ancestry leads were exhausted I found myself still with an itch to scratch. And so, I moved to Toronto history and more specifically focused on the neighbourhoods east of the Don River: Leslieville, Riverside, The Beaches, Riverdale, and East York.  After some visits to City Hall, The Toronto Archives on Spadina, Libraries, and of course digital resources, I ended up with many interesting finds about my hood and my house,specifically.

This Goad Fire Insurance map dated 1913 was the one that piqued my interest the most. 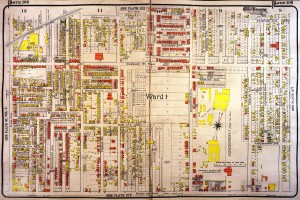 Curious what a GOAD Map is?

Goad maps a.k.a. Goad plans or Goad atlases incorporate detailed street maps including individual buildings and their uses.The maps are named for Charles E. Goad who first produced such things for Fire Insurance companies.[1][2]Charles Goad was a Civil Engineer who practised in Toronto, Ontario and London, and elsewhere. His major business was the creation of detailed street maps for the inner areas of industrial cities, often as a client of insurance companies. He also produced other larger-area maps e.g. for Ontario.

What I learned from my research

It showed me that my house was actually a horse stable in 1913, and that many of my neighbours early century homes were built before mine.  Other items of note is that the Ulster Athletic Field had not been built yet east of Greenwood, the Brick Yard was still there. On the west side of Greenwood the park was not there yet, but there were some houses on that side which would have been perched up on top of the hill (the government may have expropriated 7 years later in 1920 when Greenwood Park was built). Hiltz avenue doesn’t exist yet. Glenside is called Glencoe and no houses had been built yet. The Redwood vaudeville theatre/pool hall had not been built yet.Of course, the streets that were formed after the stadium was torn down: Billings, Lower Highfield, Athletic, Hertle don’t exist.  Woodfield is called Morley Avenue.  The Ashbridge family church stands alone on the property, it has since been engulfed by what is now “Leslieville place” at Vancouver and Queen.

There are many fantastic historical photos and maps in our facebook archives you can click the link here.

If you live between Pape and Coxwell and between the track and Queen Street East you may want to take a look at this map as well. Click here for a high resolution link. Brick structures are RED and frame structures are YELLOW.  You can find many of the old Goad Maps here.

Thanks for reading! If you have any neighbourhood stories to share, please do so below.