You have to have a lot of nerve to have been knowingly selling water as premium grade fuel on and off for more than two decades. This appears to be the case at NEON Gas Services at 1200 Queen Street East (Just West of Leslie on the corner of Curzon Street and Queen).   New documents have been acquired from TSSA and Ministry of consumer and commercial relations that show there being an issue back to the early 1990’s. There are also documents that show a substantial loss of fuel so an environmental issue is also a concern.

Recently the problems with their underground tanks seems to have hit an all time high as many are reporting their cars breaking down just after filling up with premium grade fuel at NEON.  See below for the testimonials we have so far, as well as the documents.

Since a lot of coverage from Sean O’shea at Global TV (Here is the most recent update) I have noticed a lot of comments from locals standing up for the gas station and questioning the truth to this story. I can assure you – it is true. There is no conspiracy. These people are crooks and should be out of business. Today a gentleman named Ahren emailed us to tell us his girlfriend filled up at NEON and then had her car breakdown in the middle of the highway. Luckily everyone is ok! The outcome could have been different. Can you imagine being on the Gardiner Expressway broken down because you have bought water as premium gas? It is time for us to get angry and make sure this comes to an end!

At this point we are trying to find all the people that have been affected by this so that we can approach government agencies as a group.   Many have mentioned having their car broken down, but we need their stories to add to our list. Please email me at ben@leslieville.com and I will add your story to ours.

I filled up at Neon Gas . My car stalled and would not start again just 4 blocks from Neon station. I had my car towed to S S motors the shop that does the work on my car. They drained my gas tank and found over 4 letres of water along with dirt and grime in it. That was 10 days ago all attempts to fix my car have been unsuccessful the cost in the thousands and I am worried the engine will never work properly again. I have learned many others have had similar experiences after purchasing gas at Neon. What appears obvious after examining the evidence is that most people who get gas at neon have no problems but I every couple of weeks gets water in their cars has tank. The problem that this causes is when the government agencies test the gas there is never a problem  because it only happens randomly and because water is heavier then gas only one car takes all the water first before their gas leaving it ok for the next customer so it’s like playing Russian roulette . I have bought gas at neon and I know many others who have bought gas at neon with no problems whatsoever. The time I filled up with the bad gas a friend of mine pulled up and started filling up beside me we talked from our cars. We both drove away she with no problems I got just 4 blocks . Warn as many people as you can and complain to authorities and let them know it’s random or they will never fiqure it out.

On Sunday March 30,2014, I had filled up my car gas ( Premium) at Neon Gas Service on 1200 Queen st. Toronto . Their phone number is 416 778 6788. My gas tank was almost empty and after I got gas 7 minutes later it stopped at intersection at  Carlaw and Lakeshore Blvd. CAA helped me out take to garage. Cocomile car repair service inspected that the fuel pump was damage because of the instead gas the tank was full of water.They tested the gas with soak with paper touch with lighter it was not started fire.The bill comes up with $1056.44.I called gas station but no one called back for 3 times after I called. I had found in reviews two people had same trouble like me. How can this gas station qualify with safety standard and still running business.My mechanic from Cocpomile auto repair shop called them to give me back the cost of damage but no one pick up phone calls and no one call me back. This business should be suspended.

I am writing to you in the hopes that you can direct me to, or better yet, help me with a dangerous problem that has been going on for several years.

I recently wrote to the TSSA and corresponded with Tyler, who was less than helpful, which is why I am turning to you.

On March 31 of this year I went to Neon Gas Services, a full serve independent at 1200 Queen St East in Leslieville, Toronto.

They filled the tank with “premium” gas and water. My car shook, spluttered and died a few feet from the pumps. It cost me $1500 and needs another $1300 to fully repair it.

I ordered what I thought would be an inspection report and was sent all the reports and incidents and complaints (including names and contact info) since 1992 from the TSSA.

In one week alone I have compiled a list of ten people who also got bad gas over the last few years… and the list is growing daily.

Most of us have kept the water/gas that their mechanic removed from their vehicle or the mechanics note of water in the gas tank.

We have a lot of proof.

The TSSA has said they have inspected and done “moisture tests” and the gas at Neon is fine… so the owner continues to sell bad gas…. And people continue to buy it and unwittingly put themselves in danger…. Because your inspectors gave Neon the seal of approval.

The highway is nearby (Lakeshore and the DVP) and some people have made it that far when they broke down. It is extremely dangerous. You lose power steering your car shakes and splutters and stops. If you are in the middle lane, good luck.

You may be aware that Sean O’Shea an investigative reporter from Global TV has done a story over three nights last week on his segment “Consumer SOS”.

He apparently requested an on camera interview with a representative from the TSSA but was denied.

There are a lot of young families in our neighborhood and I myself have four boys who drive.

This topic “Bad Gas at Neon” is becoming a hot topic on FB and online blogs (the Leslieville blog and the Toronto blog) and someone needs to step up.

I am hoping that it is you.

Thank you for any help or guidance you can suggest and I realize that this may be outside your jurisdiction but I feel that in the interest of public safety it is our responsibility to do what we can before someone is seriously hurt.

Thank you for your time,

In the fall of 2011 I filled up at NEON Gas Services at 1200 Queen Street East. I was driving an almost new Acura MDX which had no history of problems. The car was near empty when I filled up with “premium fuel” at a cost of over $100.   I broke down just after leaving the station and I had it towed to downtown Acura. After analyzing the fuel they found that it was mostly water, mud and other contaminates and had almost no actual gasoline in it.  I had to pay $500 to have the engine cleaned out but I was lucky enough that no major maintenance had to be done.  It seems that the underground tanks are not tight, and allow rain water to enter them.    This operation should be shut down immediately!   It is only a matter of time before someone is hurt in a car accident because of the gas stations negligence.

Your BBB has made several attempts to contact the business regarding the above referenced complaint. We regret to inform you that we have not received a response from the company.

Your BBB develops and maintains Business Reviews on companies in our service area. This information is available to the public and is frequently used by potential customers. In the case of your complaint, the company’s failure to promptly give attention to the matter will be reflected in the report we give to consumers about them.

If the company has contacted you regarding resolution in the interim, please notify your BBB.

I saw your post on FB. Funny enough, I just pushed a guy in a 2011 Range Rover on Wednesday night off of Leslie, south of Queen. That’s as far as he got after filling up there. I thought it was a one off, however, I believe an inspection may also reveal more unscrupulous activities like the employees and how they’re paid, rights etc. You can also contact the MTO as there is a licensed garage their as well, but the MOE may be your best bet.

I am have a similar story on poor gas quality from Neon Gas in Leslieville.

This morning I filled up my gas tank- $100.00  with Premium Fuel from Neo Gas at 1200 Queen Street. I managed to drive 3 blocks to Eastern and Carlaw and the car completely ceased.   Called my roadside assistance to have the car towed to the Lexus Dealership and they discovered that the fuel was 50% WATER!!!! And 50% fuel the gas was extremely poor quality.

The car fuel system will need to be drained.   The cost of the repairs are about $1500.00 however they are still draining the car fuel to identify if there are further issues.  I contacted Neon Fuel and they immediately gave me another number to call and they did not answer the phone and I left a message.  I did report the issue immediately to TSAA case number 3649.

I am seriously concerned about public safety personally my Lexus RX350 completely ceased while I was driving. If I was on the hiway this would have been a very serious issue and is putting potentially people’s lives at risk.

I am not sure who else I should contact?

Thanks for spearheading and collecting our complaints. 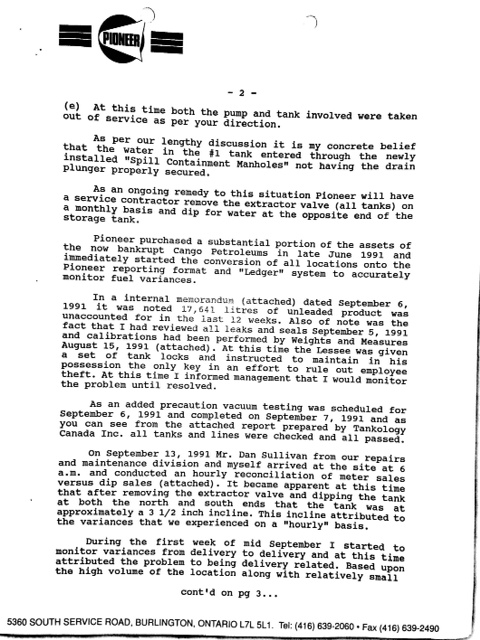 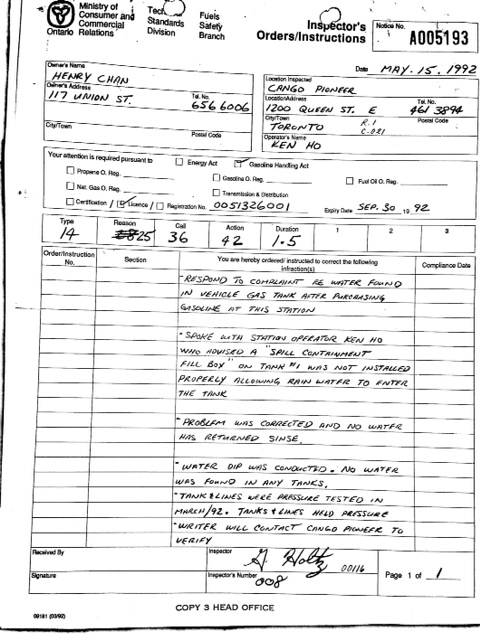 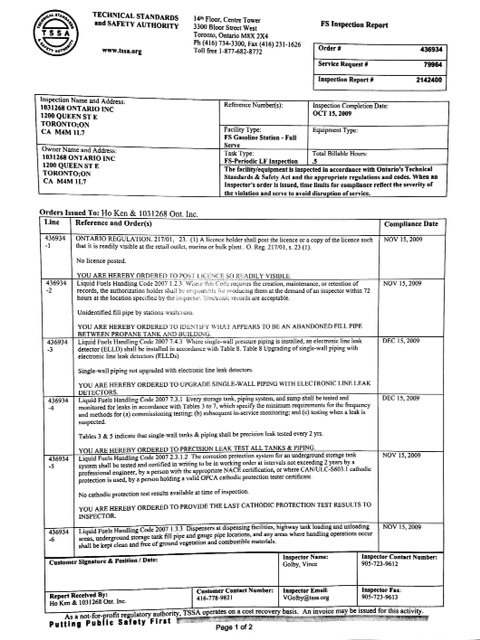 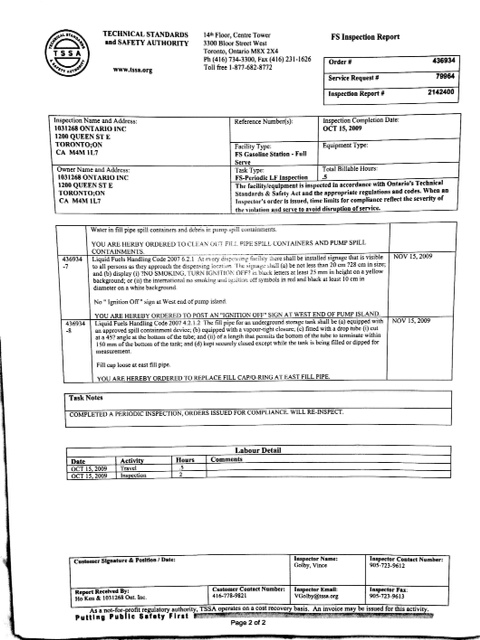 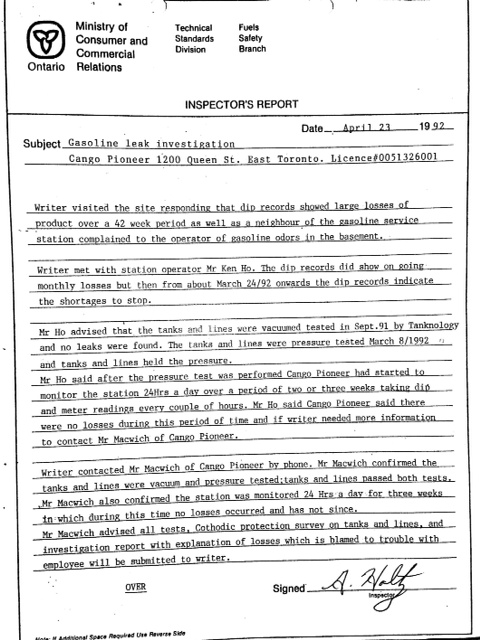 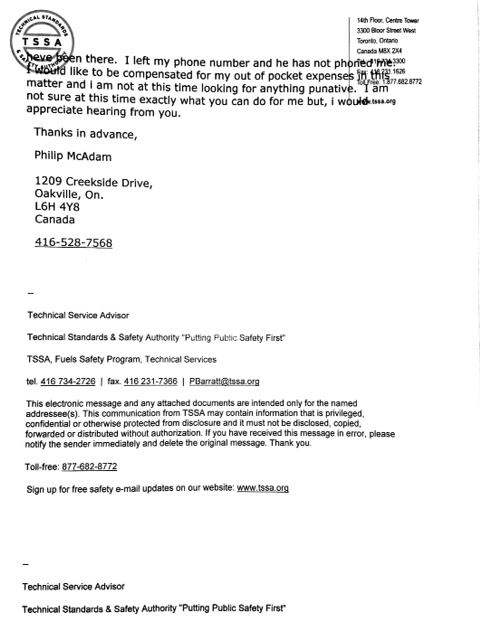 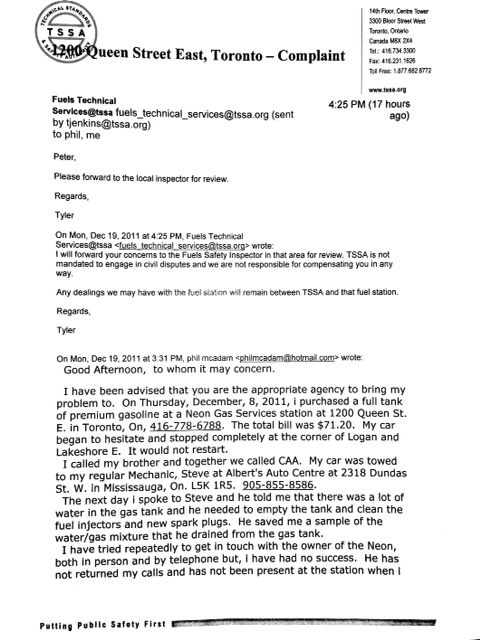 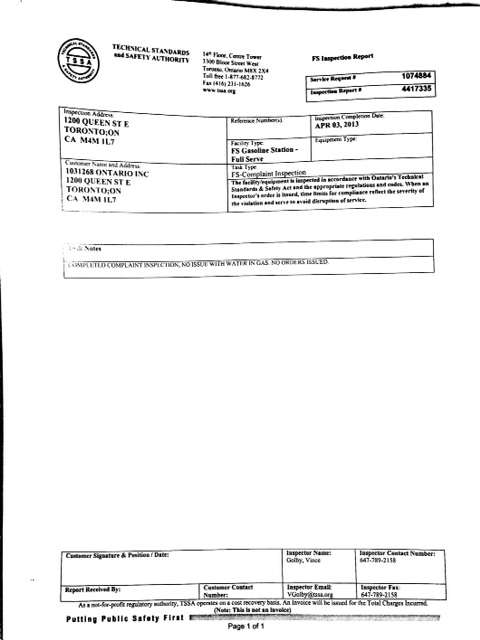 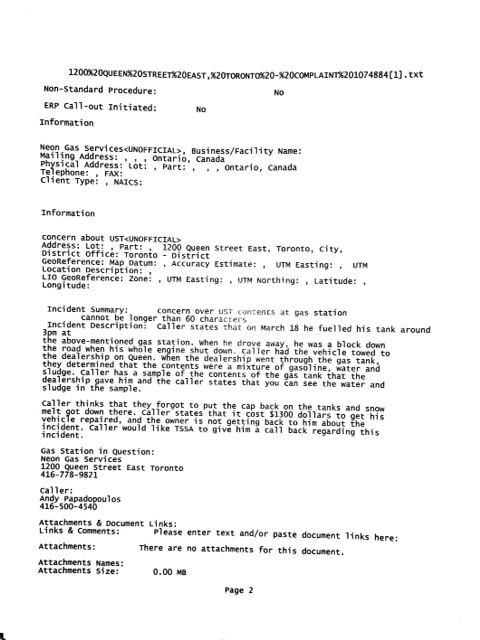 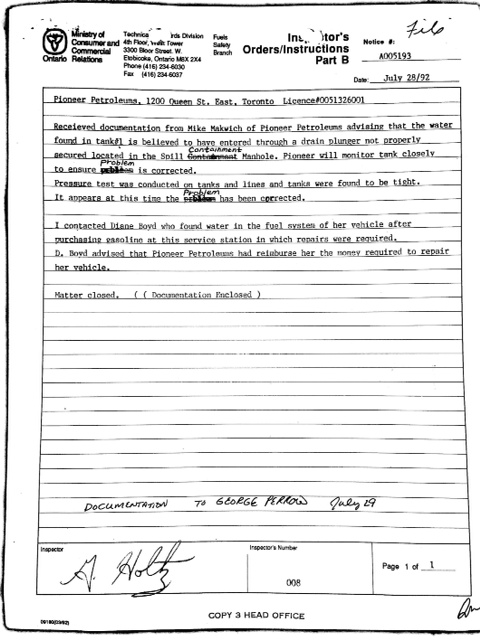